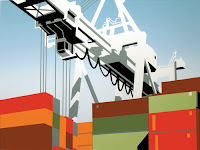 I visited Mike Kimball in his studio at the SOMA Artists Studios. In addition to participating in open studios with the Bay Printmakers and at his SOMA studio, Kimball sits on the ArtSpan board which oversees SF Open Studios. Kimball is also an organizer behind SOMA Open Studios, which promotes the arts community and consciousness of the SOMA district.

Toy trains have been a favorite of many children, but growing up in New Mexico, Mike Kimball had close encounters with the real thing. In those early germinations of a life long interest in industry, Kimball’s talents as an artist manifested in drawings of trains:

“When I was maybe three or four, we lived in a city that was part of [the] freight area for the Santa Fe railroad that ran through that area […] when I was really young, I used to draw a lot of trains […] they’re just little kid drawing, but even then […] you can see the beginning of putting stuff in perspective”

Supported by his parents from a young age, Kimball received art training early:

“When I was in grade school and high school, my parents - they noticed that I had drawing skills - so they were really good about letting me take art classes and painting classes”

After high school, he attended a vocational art program in Denver, but ultimately dropped out of an undergraduate program at UNM to pursue a career in illustration and graphic design:

“I picked up this pretty sweet job [at a] newspaper where I was doing illustration, like editorial illustration, and graphic design […] so I never finished [my degree]”

Eventually, Kimball moved out to San Francisco in the hopes of finding broader options as a graphic artist. The move would also prove to feed his interest in the visual landscape of cities and industry:

“I’ve always been fascinated with cities […] When I was driving out here [...] I came through the Caldecott Tunnel […] and laid out before you is all that: the port, and farther away is the city on the horizon […] It definitely made an impression on me”

After twenty years in the graphic design field, Kimball began taking painting and printmaking classes part-time. But the journey back to fine arts was not without its artistic baggage:

“I had in my mind that I should disassociate anything that was graphic design influenced from what I was trying to paint, so for a while I was trying to paint very realistic […] I was even approaching printmaking the same way […] thinking, ‘How would Rembrandt make a print? I need to be like Rembrandt.’ […] I studied quite a bit of art history so I had in my mind all these precedents”

An instructor at CCSF, Glen Moriwaki, pressed him to embrace his graphic instincts:

“I was trying these different things, trying something that was more loose and brush stroke and trying to figure out ‘what is it to be an artist’ [… He asked], ‘Why are you running away from what you are naturally inclined to do?’[…] That has always stuck with me”

Kimball has since completed his degree at CCAC, left his position as Art Director for the San Francisco Business Times, and continues to work as an artist and freelance graphic designer. In serigraph, Kimball has found a medium that connects his fine art with his graphic arts heritage:

“It’s very similar as far as the way you produce a graphic design and a screen-print and it lends itself to very graphic images, so I’m starting to feel very comfortable in it”

In his serigraph series, “Cargo”, completed while on an artistic residency in Belgium in 2005, Kimball pushed the medium, as well as his artistic tendencies:

“I want to try and make these very geometric compositions so I’m dropping out a lot of detail, but I’m so tempted from history to paint in every little bolt”

But he has not completely abandoned realism, taking inspiration from precisionist painter, Charles Sheeler, and local photorealist painter, Robert Bechtle. Instead, Kimball navigates between the abstraction of graphic arts and his realist influences:

That first-hand observation of modern industrial landscapes has marked Kimball’s work from his early drawings of trains and continues to inspire new subjects for exploration:

“I think a lot of my art kind of glamorizes the skyscraper, but I also like to look [at] what it looks like where trailers are parked under an overpass […] there’s plenty of places in the city, but its more gritty and it’s more industrial. It’s not the perfect, pristine skyscraper buildings that you see in the Financial District”

See more of Mike Kimball’s work at Open Studios, from October 24-26. Along with fellow Bay Printmaker, Javier Chalini, Kimball also has works on display at the Falkirk Cultural Center through the end of the year.