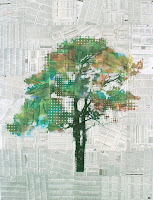 I first met Phillip Hua at his studio in the Noonan Building during Open Studios. His use of the stock pages from the Wall Street Journal caught my attention, so we arranged to meet later for the Arteaser Project.
A first-generation American, Phillip Hua grew up in San Jose reading comic books and playing video games. While he drew and took art in high school, he did not commit to art school until a teacher at De Anza Community College encouraged him.
"I went through lots of phases where I wanted to be a teacher, I wanted to be an entomologist and study bugs, I wanted to be a psychologist at one point [...] after high school, I went to community college cause I still didn't know what I wanted to do [...] I took an art class and had this teacher who really liked my work and she kind of looked at my work one day and said, ' You should do this'."
Once decided on studying art, Hua's interest in games and comics led him to focus on illustration at Academy of Art in San Francisco. Nonetheless, Hua was able to begin branching out from figurative work:
"My junior year I started to do more abstract work for my electives and just found that I was really drawn into that"
After college, Hua began a relationship with another artist who challenged Hua's artistic boundaries. In retrospect, Hua regards that relationship as a key influence, in addition to works by Robert Rauschenberg, Jasper Johns, Barbara Kruger, and Yuken Teruya:
"We collided often - just coming from different art backgrounds and modes of thought - and that collision was often troublesome and rocky, but it was definitely beneficial coming out of it [...] conceptually stronger and thinking about what I was doing. Where illustration was very focused on telling everything in that image. [...] he was sort of pushing me to think more beyond what you saw: the materials, the process, the reason, the inspiration"
Meanwhile, Hua found work in galleries, doing freelance design, and a part-time job in a frame shop. Alone in the frame shop, Hua would listen to NPR on the radio for hours, nurturing an interest in global affairs:
"I used to be not interested in current events, not interested in politics [...] Current events, politics and the news is sort of the most interesting soap opera to me right now"
In 2005, Hua joined his father on a trip to China. He was struck by the pollution hanging over Beijing, which was undergoing large-scale development ahead of the 2008 Olympics and as a result of the country's booming economy:
"Coming from California where we're very [...] sensitive to the environment, it was just this sort of thing that I was not used to [...] and contrasting that idea with their massive construction [...] there's this concept of growth and decay"
Returning from that trip, Hua created a series of abstract pieces, called "De/Construction", in which elements of the painting are created and destroyed. He then continued to explore the theme of the environment in a new mixed media series, this time using figurative images:
"There's this funny sort of poetry to have an image of a tree on paper. To construct a tree out of its remnants, essentially. And then you wrap it in packaging tape [...] you're wrapping something natural in something synthetic"
The "Re:action" series, is laden with commentary, beginning with the carefully selected materials:
"None of the materials are archival, and that also speaks to [the fact] that the environment is degrading - it's not going to be around forever. So, when these pieces are left in sunlight they turn yellow and start to degrade"
I immediately noticed that the newspaper on which Hua's trees were printed were pages of the Wall Street Journal. This was no accident:
"I think the Wall Street Journal is sort of the bible of capitalism [...] and I sort of use that as symbolism for not just a newspaper, but specifically a newspaper that deals with commerce and capitalism"
Hua manipulates the ink with water after they are printed, making each piece unique and inserting a human element to the digital printing process:
"The painting process [is] sort of a commentary on contemporary painting - painting in the 21st century with digital technology [...] I sort of feel that it's natural that the computer would influence painting [...] Its a cyborg of an artwork: there's a natural element and a mechanical/technological element to it"
For his next series, Hua is developing prototypes that continue to play with images of trees on paper and the impact of a dynamic environment:
"It's sort of the opposite mood and feeling, where the tree comes forward and it comes out of the paper. It's a little more of a poetry about reclaiming what it once was, so a tree coming out of paper as opposed to paper coming out of a tree"
Hua has a "Re:action" piece in the Hueliday show at the Hang Gallery Annex through December 30.
Posted by Greenballoon at 11/26/2008
Tags: mixed media

I am very happy to read this. This is the kind of manual that needs to be given and not the random misinformation that’s at the other blogs. Appreciate your sharing this best posting.

I extremely needed to send a fast remark keeping in mind the end goal to express thanks to you for those superb tips and indications you are giving here. The readers are quite impressed after reading this impressive post. We provide best dissertation writing service online, here students can easily achieve essay our website.

Hua is one of the best personality and a visual artist who relies on technology and digital processes in order to project what is on his mind. You will impress by great works of this nice personality. Coursework writing services.