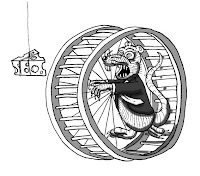 Can’t wait to check out the book.
I love rats and all their associative mani-festations. From Ed Roths Rat Fink to Banksy-http://www.artofthestate.co.uk/banksy/banksy_spitalfields_rat.htm

Awesome! Oddly enough, I was just introduced to Rat Fink not to long ago when interviewing David Becker for Arteaser...

good call! I totally saw those Banksy rats here in nyc. He nailed it! Its an undeniable topic.