I met with Steve Javiel sometime ago in his apartment and studio on Nob Hill
Growing up in Los Angeles, Steve Javiel did what most Southern California teenagers do: hop in a car and head to the nearest mall for some quality hang-out time. While often an aesthetically challenged environment, the mall still managed to inspire Javiel to creative pursuits:
"They would always have these little shops with people painting portraits and I thought, 'That's cool, I want to do that.'"
Javiel went from doodling characters from the Simpsons to making rough sketches of his grandmother and mother, many of which still adorn the walls of his family's home in Los Angeles. Impressed by portraiture's representational qualities, Javiel wanted to become a portrait painter, but lacked the training:
"[I wanted to be] able to capture that beauty. Seeing these other artists paint like it was nothing: a couple strokes here, a couple strokes here. But when it comes to it, it's not easy!"
After graduating high school, Javiel went to Los Angeles City College and took art classes from across the board:
"I knew I wanted to do art, but I guess I wanted to test the waters first [...] I pretty much took all their art classes and then it came to the point where my counselor said, 'Okay Steve, when are you going to stop taking art classes and focus on your general ed.'"
Meanwhile, Javiel's time had become increasingly occupied with working and his art was falling to the wayside. He had attended National Portfolio Days at Pasedena Art Center, but his portfolio was lacking. Finally, his college counselor showed him a course catalog for the Academy of Art in San Francisco and suggested he apply:
"I applied and I guess everything just fell into place: I got a little bit of a grant, I got the loans... everything just fell into place. I couldn't say no."
Leaving Los Angeles would mean more time to focus on art and fewer distractions, but it was a challenging step for Javiel to make:
"It was hard leaving LA - I think that was one of the hardest things. Leaving LA, leaving your family behind, leaving everything behind and just starting new"
At the Academy of Art, Javiel was exposed to a new level of painting and drawing technique, but importantly he was also exposed to new modes of composition:
"[Carolyn Meyer] introduced me to abstract. It was like a whole new other world. It just opened new doors to me. Seeing her paint, seeing her doing abstract and being successful and teaching. I just loved it. I loved the textures"
Meyer also encouraged her students to experiment with materials, which is how Javiel discovered using paper, pumice, and joint compound. That experimental mode continues to drive Javiel's creative process:
"Just a couple weeks ago, I used a roller and that's how I got [a new] texture and just by experimenting it led to [a couple new paintings]"
Javiel found new inspiration in portrait and figurative work by Chuck Close and Jenny Saville, but over time he gravitated further and further towards the abstract, inspired by the likes of Jasper Johns and Robert Rauschenberg:
"When I came out of school my body of work was everywhere [...] I painted portraits, but I painted portraits abstractly, so that was another way I could have gone [...] I love painting portraits, but I'm just not satisfied by it"
The move from Los Angeles to San Francisco also proved a pivotal change, as Javiel absorbed the urban landscape from a more intimate vantage point:
"I've never walked so much in my life until I came here to San Francisco. And just by walking, I guess I started to see things differently [...] In my mind I'm trying to make a composition already, [...] just being influenced by decayed walls and old, industrial factories"
Instead of driving to the mall, Javiel now sets out on foot, taking photographs around Pier 70 or collecting rusty nails from junk yards. At some point he realized that his source photos often captured serial codes or other typography that has now come to anchor many of his compositions. Besides the richly textured landscape that San Francisco provides, it also offered Javiel a sense of community that had not existed in Los Angeles:
"Coming here, being around other artists and seeing other artists' work [...] I didn't have that community of other artists around to influence me."
Catch some of Steve Javiel's work on display at Limon and stay tuned to the Arteaser Calendar for news of more upcoming shows.
Posted by Greenballoon at 8/30/2009
Tags: painting


I love how people say we don't have seasons out here in California, but this morning started like an overcast autumn day, then warmed up to a sunny spring or summer day, and will probably end with a bitterly winter chill rolling in from the coast. Does that mean sweaters should go on sale before lunch?:


Last night I made it out to ArtSpan's mixer at Dick Blick Art Materials on Van Ness. Attendees enjoyed refreshments, a glass painting demo, and 20% off purchases: 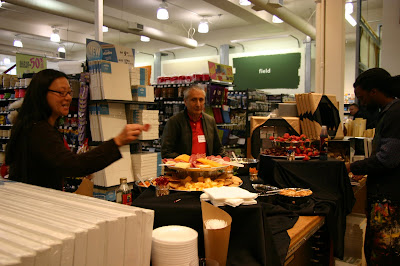 Although registration for fall Open Studios has closed, the organization is still looking for volunteers for the opening weekend gala and to gallery-sit during the month of October. Click here to sign up! 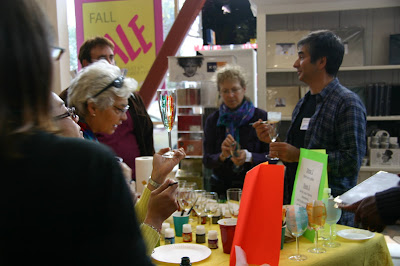 Next, I headed over to One Otis Street for the Lincart's Flamenco and Frog legs party. Rebecca Goldfarb's Align a Line greets visitors in the stairwell up to the gallery space: 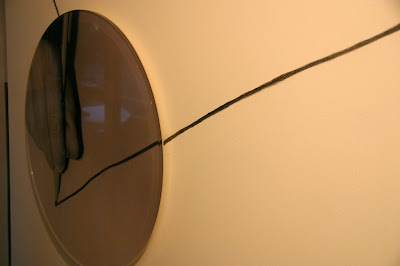 Upstairs is another set of works by Goldfarb, YES NO (below): 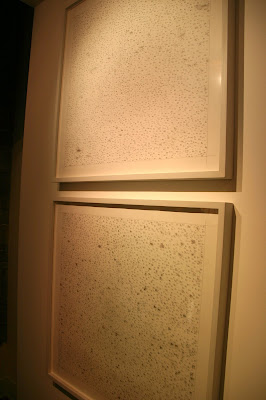 Detail of YES NO: 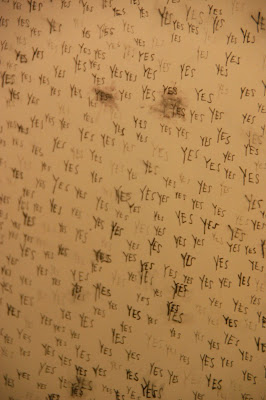 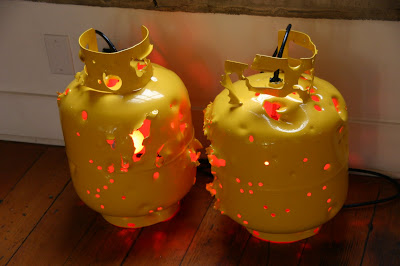 In one corner was an installation by Bill Culbert , as well as a drawing by Barry McGee (upper right) and Red Shirt by Pip Culbert: 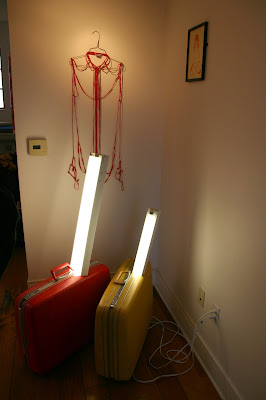 Graham Gillmore's There is Hope: 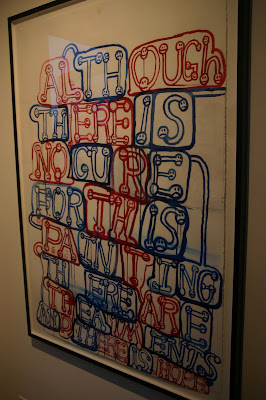 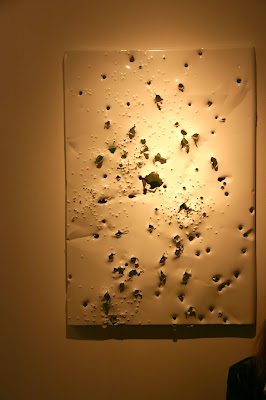 As usual, I arrived on the early side. When I left, the room (below) was packed and the flamenco performance was about to begin: 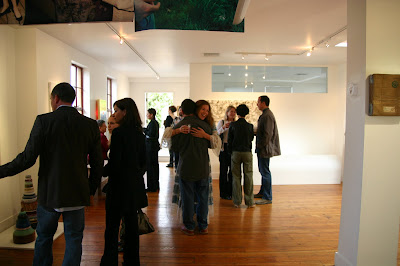 The party continued outside on the roof of the Enterprise Rent-a-car: 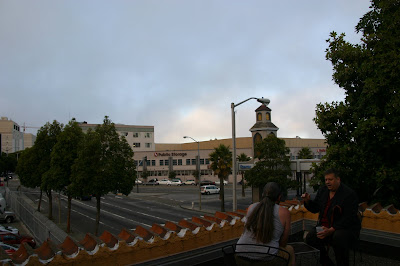 Spencer on the Go morphed into Spencer on the Roof, serving up delicious lamb stew and escargo pastry lollipops, but, alas, no frog legs: 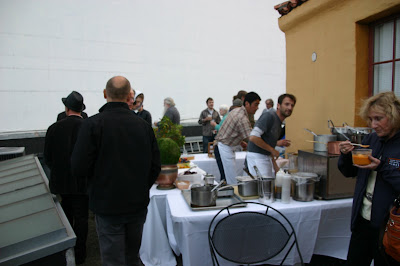 Organize your life around art shows featuring artists interviewed by Arteaser with our handy-dandy Arteaser Calendar. Or just wait for the weekly Weekend Guide.


They say the best things in life are free - they must have been talking about enjoying great art around the San Francisco Bay Area (obviously!):


Howdy! If y'all are lookin' for somethin' to do this weekend, this here list'll set ya'up: