This week at Arteaser, we met up with a couple artists showing their work privately in an apartment in San Francisco. Part of what the residents hope becomes a rotating series, guests were invited to share an evening celebrating art by friends.

Earlier this year, when Sarah Hobbs moved into her new Noe Valley apartment with her roommate, Valerie, she was not satisfied with the bare walls that stared back at her. At the same time, she knew several friends who created art, but were not active in showing it.

“People didn’t want to make art for no reason. I think people want to think that people are looking at what their doing, so that was the hope that if we put up art in our house that people would want to make it more because someone was looking at it”

While not an artist herself, Hobbs enjoys art and firmly believes in art appreciation, so she proposed the idea of a rotating gallery show to Valerie. As a painter not entirely comfortable sharing her own work, Valerie hesitated, but ultimately agreed:

“Because I have such a personal relationship with it, it was hard for me to accept this idea […] I knew there’d be weirdness about it, but I knew at the end everyone would be ‘That was so nice and great and it was so fun to see people’s art and [have] everyone get together.’”

Hobbs had seen works by her colleague, Cindy Shih, on a blog. Shih started the blog in late 2007 to document her work after being inspired by a friend:

“She was taking some classes at the local art institute and she just started doing some pastels and putting it up on a blog […] I was inspiring to see because […] she’s an engineer and she decided to take some art classes because she was interested. She really never did art before […] I can see the progress that she’s making in the work she’s doing […]” 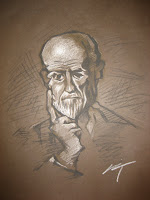 Born in Taiwan, Shih had a natural talent for lifelike drawing. The realization of her talents started to come when a childhood friend asked ‘How do you know which side to shade?’ Indeed, Sarah and Valerie’s show featured some works by Shih dating from junior high:

A fan of work by Egon Shiele, Shih is drawn to the artistic process:

“I remember going to Europe and […] picking up Michelangelo’s drafts […] I just wanted to have his sketches so I could see the process that he takes to make his masterpieces. That’s what I’m interested in - seeing how everyone develops their style”

Her repertoire of figure drawings and studies reflect that interest, but accepting the incompleteness was not easy:

“I don’t do any faces because I want it to look unfinished because I don’t feel like I ever can finish it […] I used to really struggle with that, when I was younger, I felt like I could never finish something and that’s why I didn’t want to draw, I didn’t want to paint because […] I didn’t know how to finish it and it was never actually done”

Hobbs and Shih had shared ideas about art initiatives in the past, so Hobbs suggested that Shih be the inaugural artist in their home gallery experiment. Accounts of Shih’s initial reaction vary, but at some point Bill Yancey, another colleague, was approached to join in the endeavor:

“It’s hard because people don’t want to show their art […] I didn’t even think we would get anyone to hang their stuff up […] The hardest thing about this was in all honesty was getting people who are like, ‘I want to do this.’’”

A native of Modesto, California, Yancey grew up creating graffiti art in public spaces, inspired by artists like Alexander Rodchenko:

“I would just go to the library and check-out like twenty books at a time. I was really into Russian Constructivism”

Working full time left little energy to create for years, but feelings of boredom, among other things, have driven Yancey back to creative pursuits:

Taking wisdom from his father, Yancey considers how to balance career and art:

“I don’t look for fulfillment in my work […it’s] how you get the money to do the things you love to do. Your job isn’t what you love to do. Which sounds kind of defeatist and sad, but I think it’s actually a good way to go about things”

Shih, on the other hand, has struggled more to find such a balance. Hesitations manifested early when decided whether to attend art school and she continues to face challenges in pursuing her art:

“I definitely did [think about going to art school], but every single time I though about it the rational part of my brain told me that I probably shouldn’t […] The dream has always been to make [the rational side and the artistic side] come together. It could be now, it could be later, it’s just that there’s always thing in the economy or family that keeps me from doing that.”

But for a night in a Noe Valley apartment, a group of friends were able to enjoy the art that happened despite these challenges. For Sarah and Valerie, their walls were no longer empty, but grander schemes have yet to emerge:

“It was more just, ‘Wouldn’t it be nice to sort of have this excuse of let’s all get together and appreciate the fact that our friends have these great personal pursuits’”

Nice blog, I like to read and I It will not hesitate to visit this site again
happy wheels
super mario bros
pacman
agario

Great info. I love all the posts, I really enjoyed, I would like more information about this, because it is very nice., Thanks for sharing.
Signature:
i like play games happy wheels online and play happy wheels 2 games and Download retrica online includes more than eighty different filters with many different styles and include retrica indir , and zombie tsunami is the ideal game for anyone who loves the running game genre

To flee war, to protect the lives of themselves and their families. Thanks so much!
Mario | Friv | Doraemon Games | Kizi

I am really enjoying reading your well written Information. I have read your post carefully and relies that this is a very helpful for me
happy wheels demo | friv4school | girls go games | games 2 girls | happy wheels 2 | fireboy watergirl

The blog or and best that is extremely useful to keep I can share the ideas
of the future as this is really what I was looking for, I am very comfortable and pleased to come here. Thank you very much.
earn to die 3| earn to die 6
earn to die 5| happy wheels
strike force heroes| slitherio
earn to die 5| good game empire |tank trouble 2 | game tank trouble new

Welcomes to google terminal keep sharing such ideas in the future as well.
google snake this was actually EARN TO DIE
what i was looking for,and i am glad to came here! AGE OF WAR 2
Hi! I’ve been reading your blog for a while HAPPY WHEELS
I want you to thank for your time of this wonderful read!!! Slitherio
Amazing insight you have on this, Slither io This article always blew me BIG FARM

I was working and suddenly I visits your site frequently and recommended it to me to read also. Age Of War 2
Big Farm | Slitherio
Tank Trouble | Happy Wheels
Goodgeme Empire | Slither.io

Thanks for sharing the information. It is very useful for my future. keep sharing. Can you play more games at :
Geometry Dash 2.0

This blog is so nice to me. I will continue to come here again and again. Visit my link as well. Good luck
obat aborsi
cara menggugurkan kandungan
obat telat datang bulan
obat penggugur kandungan

The article gives me a lot of interesting information. I still often share life experiences with friends. And I enjoyed the convenience and attractiveness of free messaging app
whatsapp baixar , baixar whatsapp , baixar whatsapp gratis

Life becomes more interesting and wonderful when you share your memorable moments with friends and family through unique photographs. You can create your own unique style impressed with image editing
square quick , download square quick , square quick app

I wanted to thank you for this excellent read!! I definitely loved every little bit of it.Cheers for the info!!!! & This is the perfect blog for anyone who wants to know about this topic
baixar facebook , baixar facebook gratis , facebook baixar

Your article made me very impressed. I enjoyed it, I would expect at your website, or more articles
baixar whatsapp, baixar whatsapp gratis, whatsapp baixar.

In your article, points caught my attention the most is how your prose, to give me a deep impression. Wish you would write more. good luck!
return man 2 game , return man 2 , return man ,

Easily, the article is actually the best topic on this registry related issue. I fit in with your conclusions and will eagerly look forward to your next updates. Just saying thanks will not just be sufficient, for the fantasti c lucidity in your writing. I will instantly grab your rss feed to stay informed of any updates.

I'm looking for a few bugs in my post. But I think I should have someone look and point out it.
http://colorswitchplay.com

I enjoyed over read your blog post. Your blog have nice information, I got good ideas from this amazing blog. I am always searching like this type blog post. I hope I will see again
jogos friv 2
juegos kizi 8
juegos yepi 2
friv 5
friv6
juegos y8
juegos 5

This is a wonderful post. I enjoyed the information lot. I will bookmark this page. Thanks for sharing this information.
starfall | abcya |abcya 7 | brainpop


I think the admin of this web page is actually working hard for his web site, since here every information is quality based information. gmail sign in

may be useful for all, helpful article once and pardon me permission to share also here :

Reading articles about art is a pleasure, thanks blogger you do a great job.
Cool math uno online

Obat Penggugur kandungan,,, Nice bag you can earn money from that
Thanks for your posting
Visit me @, Obat Aborsi,,
Jual Obat Aborsi,,,

It is actually a great and helpful piece of information. I am
happy that you shared this helpful information with us.
Please stay us informed like this. Thanks for sharing. Moviestarplanet Cheats

Excellent work done by you once again here. This is just the reason why I’ve always liked your work. You have amazing writing skills and you display them in every article. Keep it going! psd to responsive wordpress

Thank you very much for sharing this very useful information, I am very happy to have found this information that I have been looking for
Obat Panu Alami
Cara Mengobati Ptosis

Thank you very much for sharing this very useful information, I am very happy to have found this information that I have been looking for
cara menumbuhkan jaringan kulit & daging

It is imperative that we read blog post very carefully.

Hi, This Information is incredible ^_^ I want to work with you in the health sector :

The post is written in very a good manner and it contains many useful information for me :