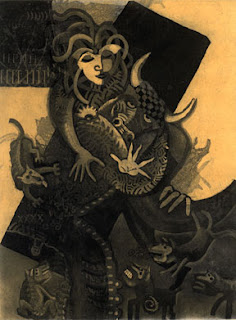 I sat down with Javier Chalini in the lobby of the Palace Hotel for my first interview of the Arteaser Project. I’ll be the first to admit that the questions I had prepared were not the insightful queries of a seasoned interviewer. I had a list of relatively bland questions that were more along the lines of an extended profile. Having said that, the twelve minutes of recorded “interview” were still useful, but more in the context of the forty minute conversation that ensued. I’ll keep the tape running next time.

Raised in Puebla, the colonial city two hours from Mexico City, Chalini’s early exposure to art was the religious art that adorned his school, a former convent.

“I used to love the Prado prints […] and I enjoyed Delacroix […] I used to know several of my roots, like the muralists, Diego Rivero, Orozco, Siqueiros, Tamayo”

With dinner table gatherings bringing together family in support of the old guard, Catholic right and the populist left, Chalini became a keen observer of human interaction. To paraphrase how this plays out in his art:

“I don’t do landscapes, I do people”

While his parents did not specifically encourage him to pursue the arts, museum books from his father were clearly an important level of exposure:

“I loved just to browse through the pictures and the photographs, I would spend hours and hours doing that, still not knowing that that was something I would like to do. It was just something nice to look at kind of put me away from the day, from everybody”

But despite his inclinations toward doodling, Chalini himself didn’t consider pursuing the arts until his twenties. After a couple years studying engineering he decided to switch to graphic arts at the nearby Universidad de las Américas in Cholula. With its scientific qualities, he gravitated towards metal plate etching:

“I [switched to graphic arts] because I wanted to do what [the other students] were doing […] I tried everything: lithography, photography, painting, silkscreen printing - all the graphic arts. [... E]tching, metal etching, which is the bulk of my work, […] at the beginning, as you know is very technical. Somehow that was a little challenge and maybe because I was into engineering maybe I was more guided to see that.”

Working as a graphics arts professional, Chalini developed under mentors at design agencies. Over the years, however, his focus has been weighting towards his art, which reflect his observations of human interaction using elements of mythology. Although some characters may be based on people in Chalini’s life, in his work they reflect more universal concepts of love, despair, and passion. On his favorite part of sharing his art:

“The discussion that [the piece] can generate. There is the visual aesthetic that talks by itself […].The piece has its own cosmography and sometimes the piece talks to me rather than me talking to the piece”

As Chalini describes it, the artistic process is one that may involve plans, but the success is in following an instinct from beyond that which is understood:

“In the image that I’m creating- painting, etching - it’s the piece [that is] leading not me; it’s the piece [that is] asking me what to do, what to draw, […] what to add. We get into conflicts sometimes; sometimes I get into big discussions with the piece because I don’t know what it wants sometimes. Sometimes I just need to let it go and just forget about it and then come back later and be more open and just be friends again.”

Chalini will be participating in the Fort Mason Open Studios on October 11-12 and his work will also be displayed at Falkirk Cultural Center in San Rafael from October 18 to December 13.