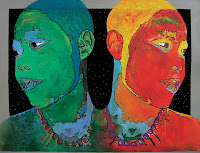 It’s been a rough week, but the show must go on. Last week, I visited Nining Muir in her studio space in the ActivSpace in the Mission District of San Francisco.

Growing up in Indonesia, Muir worked on wooden sculptures and ceramics like most other people. Unlike western craftspeople, no emphasis is placed on the individual artist in Indonesia:

“Art is part of life. There is no ego involved in art […] There’s no signature usually - traditionally - on the piece”

Not everything was typical for Muir. While her father is an Indonesian aristocrat, her mother is from a middle-class Chinese background. Stirred by this dichotomy, Muir developed an adventurous spirit and an awareness of social issues:

When her parents began arranging her marriage, Muir set out to prove her independence, first working for an Australian market research firm in Indonesia, and then ultimately moving to the US. After learning English, Muir took a job in the SFMOMA museum store:

“[I was] trying to channel something in this new country – I had to do something – channel in a positive way, the most desirable way [and … I get to be] inspired by all the big-deal artists”

Muir gravitated to the edginess and darkness of Egon Schiele and Francis Bacon. She started drawing and working in gouache, in addition to collaborating on wooden sculptures with her husband:

In the last couple years, however, Muir began taking printmaking and painting classes and has gravitated towards oil painting. With works highlighting Tibetan prayer, torture at Guantanamo Bay, and pollution, Muir reflects on social and political issues close to her heart. Recently, she has been working on a series featuring cows and their mistreatment:

A long way from her native Indonesia, Muir does not yet feel at home in the US. But as an artist inspired by social statements, she has found the freedom she needs:

“In this country, you call it ‘Freedom of Speech’, ‘Freedom of Expression’ which is [a] great thing in the world, so I try to express myself that way […] Back there in Indonesia I would probably be in jail […] This is the best place to express yourself”