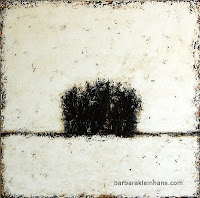 As my last stop on the first weekend of SF Open Studios, I met Barbara Kleinhans in her apartment, where she paints.

Despite having never traveled outside the surrounding area of her childhood home in rural Wisconsin, Barbara Kleinhans imagined the world beyond the countryside:

“For a while there I thought I was going to be this reporter and I used to make little magazines […] I would write travel journals and I would make up these completely fake places [..] it kind of combined the elements of this kind of fantasy world I guess I had, between the writing and the drawing”

When some of her older siblings moved to the Bay Area, Kleinhans got her first taste of real travel:

“I remember coming here in that middle school-high school years on road trips with my parents, so this was one of the few places I had ever visited outside of just the immediate area of where I grew up.”

The city left a lasting impression and when she was eighteen, Kleinhans left rural Wisconsin for San Francisco:

“[San Francisco] held an interest for me and […] everything was different about it and that was what I was craving at the time. I wanted something totally different, I wanted to be in a city, I wanted exposure to all these different people, I wanted everything that was opposite of where I grew up”

After getting a degree in fashion design, Kleinhans worked passionately for a large clothing manufacturer. But she was forced to re-examine her career path when a round of corporate cutbacks found her holding the kind of pink slip that isn’t part of a wardrobe:

To get some perspective, she packed a suitcase full of paints and a camera and traveled to Greece for four months.

Working in a less intense environment, Kleinhans began exploring acrylic painting on her own time, eventually developing a textured style from using painting knives instead of brushes:

Inspired by the textured paintings of Vincent van Gogh and Paul Cezanne, her abstract paintings evoke a quiet landscape, far from the bustling city:

“It started out as I kind of started appreciating more what it was like to grow up in that area of the US and also in the countryside and how much freedom we had as kids [...] Maybe as a kid today and in city I never would have that kind of freedom and running around and all that. I started visiting it in a very abstract way.”

Kleinhans began reconnecting with her roots, drawing inspiration from known places, rather than the imaginary ones of her childhood:

Embracing the location, Kleinhans is pushing further into the personal nature of her art:

“It has evolved to the point now where I take a lot of reference photographs […] to kind of capture something that had a lot of history for my family and bring it more directly into the painting. I think they're actually getting somewhere between abstract realism and a bit of realism in there now. So it’s the same subject but it’s evolving”

UPDATE: See small works by Barbara Kleinhans at the Studio Gallery from November 5 - December 24. She will also be participating in Visual Aid's "Big Deal" on November 8 and has works available for sale at Zonal Home in Hayes Valley.