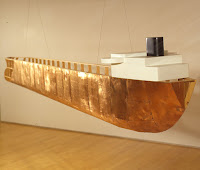 I first met Kent Roberts at an opening at Space Gallery, where he was showing a couple pieces along with fellow SFMOMA employees. On my most recent Open Studios weekend tour, I visited Roberts in his appropriately located studio in the Pier 70 shipyards.
Growing up in Albuquerque, Kent Roberts' early creative efforts often involved building vessels:
"[T]he space program was happening which really intrigued me. I even made model rockets that my Dad and I launched out in the desert"
Although he was also interested in art, he followed in his father’s footsteps and got his college degree in engineering. There, Roberts learned to appreciate certain methodologies:
“I like that idea of how to think, or the process of [...] scientific or engineering thinking. There’s a way of dealing with problems”
When his draft number came up after college, Roberts joined the Navy. After two years of service, he used his GI grant to go to the San Francisco Art Institute:
"I had already studied engineering so thought I would give my other interest a try"
Early on, he gravitated towards the detail and process oriented painting style of photorealism. But he has since embraced sculpture, broadening his scope of materials and using them more as tools to solving a larger artistic quest:
“I don’t try to stick with a medium. I just try to choose something that’s appropriate for the work […] because I’m not an expert in any of them, I know a little about all of them”
Meanwhile, Roberts had gotten involved in hanging and installing art in galleries and he now heads the installation team at SFMOMA. Like his own sculpture work, the varying nature of the contemporary exhibits he installs presents unique challenges:
“It’s exciting working with the art, putting the art up, and the best part is working with the artists [...] I worked with Richard Serra and we had a thirteen thousand pound lead sculpture, that’s molten lead, that we had to melt in the middle of the night […] or Matthew Barney, we had to pour all that Vaseline into a big mold”
Working with vested third parties is a reality for the numerous public sculpture commissions he has been awarded. Concerns about potential issues such as graffiti, safety hazards, and misuse of public space all need to be factored into his creations:
“They have all these worries and […] it gets in the way of the art, but to get the commission you have to solve those problems”
For an upcoming commission for the Moscone Park, Roberts originally proposed a monument to the location as a refugee site after the 1906 earthquake. Ultimately, he won the commission, but for a boat-like design that reflected both modern and historical elements of the location:
“I try to do pieces that are about the site somewhat, or at least fit with the site”
Indeed, a number of his sculptures have nautical elements:
“When you’re sitting on a boat for two years, maybe it kind of seeps in [… but] it’s not the sailing part, it’s the making of the ship”
Going back to his engineering roots, Roberts is largely focused on the process of creating his sculptures. But he considers the display - for which his public commissions are explicitly designed - to be an important element in the artistic process:
“I like people to see my work and hear what they have to say about it. I think it’s important that people see art. I mean, if nobody’s looking at a piece of art, to me it doesn’t exist”
Posted by Greenballoon at 10/29/2008
Tags: sculpture
Newer Post Older Post Home