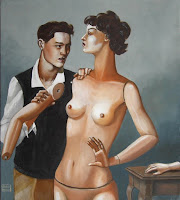 I met Erika Meriaux during Open Studios in October and the classical civilizations minor in me was intrigued by the mythology themes in many of her paintings. We later met again in her SOMA studio for the Arteaser Project.
Growing up in France, Erika Meriaux always drew as a child and even enrolled in a fine arts school as a teenager. But she left after six months as she was not taking school seriously. That may have been the end of her formal training, but at age nineteen she began painting on her own:
"I started painting when I got a small apartment in Lille [in the] north of France. The walls were white and I felt that I needed to fill the emptiness"
Meriaux took to surrounding herself with images and patterns that she enjoyed:
"My inspirations were very diverse. I liked to work with ornaments or repetitive patterns, like wallpapers or something like that, and I'm still [inspired] by that"
Meanwhile, unemployment plagued France, particularly northern France, making job opportunities hard to come by. Having started a family in her early twenties, Meriaux found herself at home painting. She began asking her husband, who worked for a software company, about transferring to California:
"I had many motivations to go to San Francisco: First, I was living in the north of France and I needed more sun (laughs) [...] and I needed a more dynamic environment for art"
Meriaux and her family moved to the Bay Area in 2000, but much of her influence still comes the Old World. The classical Western paintings that adorn the walls of European museums feature biblical and mythological references:
"I have always been inspired by visiting museums. So, I have often been inspired by classical themed paintings - it's why I'm working on mythology now. It's because it's a tribute to other painters"
While her figurative content draws from a long tradition of European biblical and mythological painting, her stylistic inspiration is in modern figurative painters, such as Balthus, Gustav Klimt, Diego Rivera, and Tamara de Lempicka, as well as 20th century propaganda art:
"In a way that propaganda use in the thirties [...] was based on archetype: very strong people, very strong men or very strong women... the idea of an archetype, a god, someone very powerful "
Harmonizing between actual stories of god, goddesses, and biblical heroes and the psychology of worship is what fascinates Meriaux and inspires her work:
"It's a very interesting thing to what lead millions of people towards something, toward an idea […] This need - the need for someone or something to worship - that is interesting because this has nothing rational. It's deep inside each person, this need of worship"
The anthropomorphic nature of the greek gods – powerfully divine beings often flawed by human vices – cleverly captures that relationship between authority and human nature. Another set of characters that similarly intrigue Meriaux are those from Tarot cards, which she explained to me were originally for gambling:
"What inspires me [about Tarot is...] it's a very popular way of expression. […Gamblers] are very superstitious, so, it's not difficult to imagine all this whole universe of gambling and images [...] When you see Tarot cards, it talks about the time it was, and what people thought at this time and what were their worries"
For Meriaux, these elements of mysticism reflect on the human psyche and need for faith:
"I think the very core of all of this is my interest for [the] human being, because as a person who doesn't believe in god or any kind of supernatural thing, what interests me [is] the need [to] follow something, follow a person."
Meriaux’s work is on display at the Center for Sex and Culture through December 11 and at Aspect Gallery through the end of the year.
Posted by Greenballoon at 12/03/2008
Tags: painting