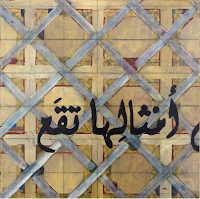 I met Marie Bourget at an opening for a group show she was in at Reaves Gallery. Fascinated by her research endeavors to find translations of Walt Whitman poems, we arranged to follow-up... which is when I discovered that we had more in common than a willingness to embark on esoteric research projects:
Growing up in Southern California, Marie Bourget dreamt of being a fashion designer. But when she showed her designs to a neighbor who taught art at UCLA, she was deeply discouraged:
“I was so humiliated that I didn’t even draw anything for years”
A year later, her family moved onto a farm in Northern California, as her father pursued a childhood dream in agriculture. Over time Bourget resumed her drawing and her family was supportive of her creative pursuits, but only to a point:
“Both of my parents were very creative people. My father actually started sculpture in his retirement years, and painting […] They encouraged me in my art, but not as a career. They were very practical-minded”
Instead, she was encouraged to study subjects like science and math, which led her into the world of high-tech finance. Meanwhile, she continued to fill sketchbooks:
“I was CFO of a public company and I would be doodling and drawing. So, when I started painting full time, anyone who knew me then said, 'Well I'm sure not surprised because you did it every minute!'"
Eventually, she decided that she needed a life change and left her company to move to France. But she found it more difficult to extract herself from the business world and was called back into duty a couple times:
“Artwork is much closer to my heart than [finance] work […] I worked with a lot of people, especially men, who just wanted to get ahead and wanted to really make money, and I was kind of [ambivalent]”
After leaving the business world yet again, Bourget recalls telling an artist friend in a cafe in Paris that she wished she'd gone to art school. Encouraged by her friend, Bourget approached the Parsons School of Design in Paris, but was asked for something she didn't have at the time.... a portfolio:
"This was a Friday and they said, 'Come in next Wednesday with a collage, a self-portrait, a perspective drawing and your sketchbooks.' So, I just kind of panicked, not knowing what I should do. I can still remember sitting in front of a mirror drawing a self-portrait"
Bourget was admitted and earned a degree in sculpture, where she constructed a number of wood pieces. She attributes her interest in sculpting from wood a bit to family tradition and a bit to and a bit to her taste for challenge:
“My grandfather was a carpenter and my dad had done a lot of carpentry and fine woodworking. I just loved something about putting pieces together, figuring out how to use the material, how to make wood do the things you want it to do […] and also I think it was to get over the fear of using all those saws”
After graduating, Bourget worked in Paris for a year before returning to California. Without the resources to create sculpture immediately available, she struggled at first to begin anew:
“When I moved back from France to the US, it was such a big change and I had a one-year old son [...] I got into my new studio and was like, ‘Oh, yikes! What do I do?’ So, I actually made something into tiny squares - a painting - and I told myself I would fill a square a day”
Using this technique, designed for overcoming writers' block, Bourget transitioned from sculpture to painting, emulating the versatility of her favorite artist, David Hockney. She began creating mosaic-like paintings, with tiles that could be assembled in multiple ways:
"I did a lot of things using a grid, but the actual grid was pieces [...] I had some that were probably up to 40 pieces, hung as if it's a painting, but each piece hung individually with a little bit of space so you could rearrange them as you liked”
With the invasion of Iraq in 2003, Bourget was inspired to explore a culture that she had some exposure to, but was unsatisfied with her level of understanding
"Having lived in France where [there is] a lot more exposure to Arab culture [...] I thought, here we’ve invaded this country that most Americans know nothing about, including me "
Not knowing how to read or speak Arabic, she began an extensive quest to find translations of Walt Whitman's Leaves of Grass. She began to paint excerpts of Whitman's poems in Arabic with elements of Islamic design. She has since found that Whitman’s style of ecstatic poetry was similar to Arab poets:
“Walt Whitman was kind of the great equalizer, was anti-war and, to me, that quintessential American poet"
Similarly, Bourget found that poetry and calligraphy had an elevated importance in Arab culture. She enjoys the script so much that she often ponders the balance between the meaning and the shape of the words she has chosen, even creating a piece that reads “Form versus Content”:
“I was thinking: how much is really the form - because I think it’s really beautiful - versus how much is the content”
Such has been her visual journey through Islamic and Arabic motifs, but the message she would have for viewers is beyond the surface:
“It’s not always black and white. We have these kind of [ideas] where, ‘we’re good, they’re bad’ and [it's not that simple]”
To that end, she has mixed the geometric patterning of Islamic design, which is non-figurative by definition, and the geometric patterning of American quilt-making. Though she realizes the context may be lost on some viewers, she nonetheless enjoys the aesthetic:
“I’ve always liked geometric things”
Watch the Arteaser Calendar for future shows with works by Marie Bourget
Posted by Greenballoon at 1/29/2009
Tags: painting, sculpture

Tour also starting replica watches calendar series, which is mounted on the same series of H-10 H-30 autonomous movement, also has more than three days power reserve is rolex replica sale double calendar display the sweep of the watch. Hublot replica uk is a World War II American military form, during the more than 100 million have been rolex replica sale over the armed forces timer, superior quality and reliable, is one of the most famous military form. Today's khaki field double calendar replica watches sale design simple and tough, masculine military form of pure magnanimity gushing out. Fake cartier watches was founded in 1892 in Lancaster, Pennsylvania, the city combines the free-spirited American spirit and excellence of Swiss technology, innovation and design and texture modeling famous. In the field of aviation watch striking performance, but also because of the deep roots of hublot replica uk and famous, it has been on stage in over 400 department blockbusters.